“Bitcoin” is now a household name thanks to wildly high values and even wilder fluctuations. The ability to make or lose thousands in a matter of minutes is exhilarating to say the least. For those of us in enterprise technology business however, the underlying principles are even more intriguing. 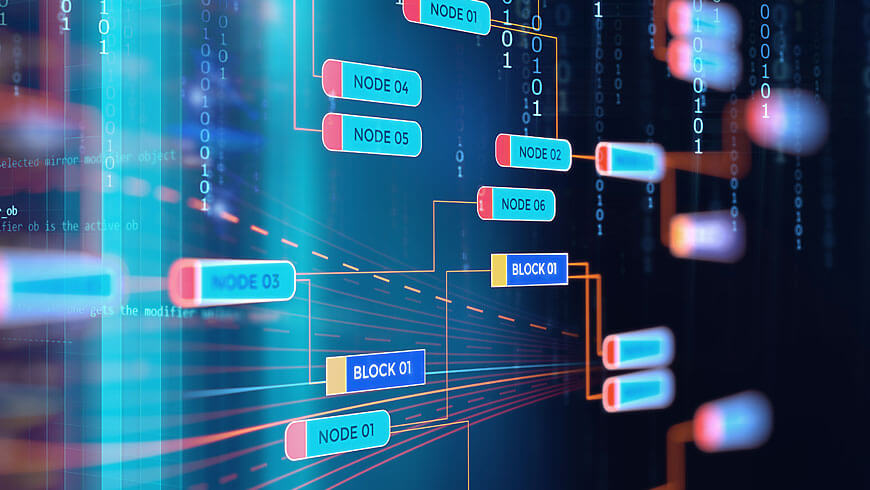 There’s a lot of hype around Blockchain, and it’s definitely something worth getting excited about. But will it fundamentally disrupt the way we do business? There are certainly some potentially groundbreaking concepts that are possible. For right now though, Blockchain is still in its infancy, a tool for forward-thinking companies and startups to experiment with.

(For an intro to Blockchain check out this infographic from PwC)

We’ve been doing some experimenting of our own and have already implemented some blockchain-based features in our platform. Likewise, many other startups in the InsurTech space are doing fascinating things with blockchain as well.

Recently, a number of companies have started to use Blockchain in a variety of verticals. One example is a new kind travel insurance: Travelers can insure their flight, and if they experience a delay beyond a certain threshold the insurer uses the Ethereum cryptocurrency to pay out instantly once the delay is announced.

Back in 2015, the startup InsurETH pioneered the idea of Ethereum-backed flight delay insurance. Within just 12 months another startup called Etherisc developed a similar Blockchain-based product; and by 2017, French insurance giant AXA had started offering a version of this blockchain based solution as well.

This is only a small segment of the industry, but the implications are clear: The blockchain can be used to improve and accelerate insurance, and it’s the startups in this space that are leading the charge. When big carriers like AXA are throwing millions into a technology like Blockchain, there are few limits to what it can do.

Smart contracts present a great use case for both underwriting and claims handling. Suppose you have an insured who wants to purchase a single-person health policy and wants to negotiate the premium based on underwriting factors such as age, type of employment, lifestyle, eating habits, daily exercise, and possible medication usage.

The insured can give access to the attendance data at their health club, the exercise data from their Fitbit, and their complete medical records. All this data is encrypted and uploaded onto the insurer’s blockchain, which aggregates the information and calculates a premium based on the insured’s current health, exercise, and lifestyle data.

This information would be regularly uploaded to the blockchain, which would allow the premium to be modified on a quarterly basis according to terms set in the self-executing smart contract. With this type of smart contract, an insured would see a direct and immediate correlation between his or her lifestyle and their health insurance premium.

PWC executed a benefit analysis of all insurance processes that could be brought to the BlockChain. According to the report, Claims Management was in the Top Right: High Benefits to business, low barriers to implementation 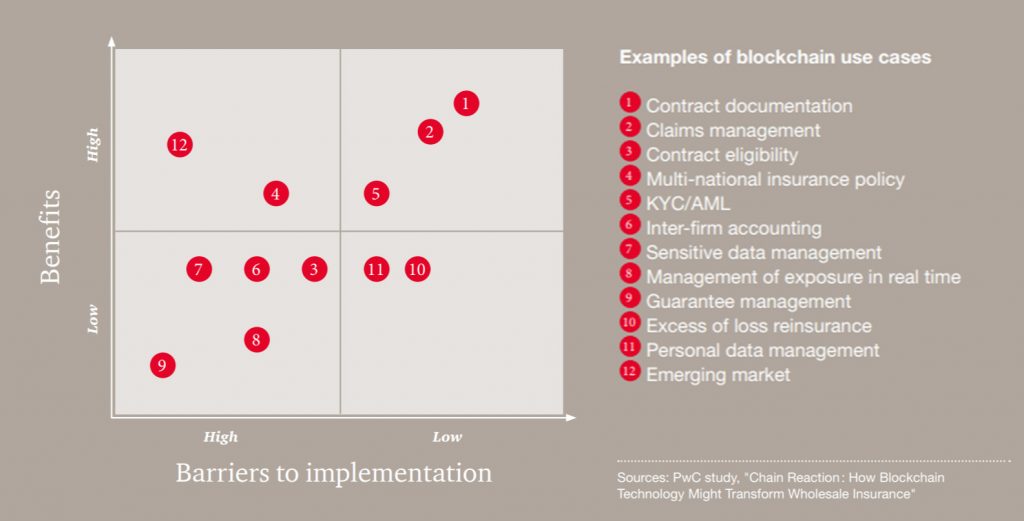 Currently, all brokers and insurers involved in an insurance contract have to independently run all of the checks, thus creating significant duplication and delay in the placement process which impacts the client. With Blockchain, there is no need to check the same data multiple times, all the relevant data is in one place, and available to those who need it.

Furthermore, as Deloitte puts it in their report,“with the entirety of a consumer’s medical and wellness records consolidated in a series of blockchains, the life insurance, underwriting, and application process could be shortened from an average of 45 days to near real time.”

The Internet of Things and Blockchain are opening new scenarios for Claims processing.

The first of which being that IoT devices can self-manage data and report claims by themselves without any efforts from the carrier or the claimant. Another interesting aspect is that IoT devices can “speak” to each other, passing vital claim information to and from their peer devices.

I expect that several years from now your refrigerator might be talking with your Smart Home to submit it's own warranty claim. Today we have a few examples of this concept being experimented with. For instance, Filament, an American company is installing “taps” on power poles in the Australian Outback. These devices can talk directly to each other at distances of up to 10 miles. Because the power poles are approximately 200 feet apart, a motion detector on a pole that is falling will notify the next pole 200 feet away that it is in trouble.

A similar approach could be used on the farms for use by crop insurers. Combining the on-ground information along with GPS and weather station data adjacent to the farmer’s fields, that would allow insurers to provide almost instant claims-handling services.

There are hundreds of other applications for the blockchain in this industry, many of which are yet to be imagined. At Livegenic we’ll continue to work and explore new blockchain-based opportunities for both our flagship product and our custom service solutions. We’ll be writing more about Blockchain and how we’ve been using the technology in the coming weeks, so stay tuned. It’s an exciting time to be working in InsurTech, and while Blockchain isn't totally transforming the industry just yet, we are laying the groundwork for some truly remarkable applications just over the horizon.